Italy was cold.  Very cold.  In fact I was even considering wearing some trousers! We amended our ferry booking from Croatia to two weeks earlier than planned, as originally our ferry only left us with 2 days to get across Italy, not leaving us much option other than to drive straight across it to get the next ferry.  Having heard rumours that the sister of a friend lived near Livorno we thought we would see if we could pop in and say hello and possibly set up camp in a corner of their garden for the night.

Rita & Richard had met us briefly at Harry and Frankie's wedding, but with so much going on and so many people around we never actually got a chance to chat to them. (Their Granddaughter did pull my beard however, which they did remember) so we felt a little cheeky when we sent them a Facebook message asking if we could camp in their garden for a couple of nights.  When we arrived we were told there was a bed made up for us and that we didn't need to sleep in the tent.  A warm house, open fire and massive comfy bed with en suite bathroom was so much more than could have hoped for.  We would have been grateful for a space in the garden and use of a toilet and shower.
Rita and Richard were travelling back to the UK on the Sunday morning so we had planned to move on the Friday after 2 nights there so we were out of the way, leaving them to pack and shut the house down and do all those little things you have to do when going away for a while without us vagrants hanging around watching TV.  However, within 3 hours of being at their house our options had been opened up for us. They offered to let us stay at theirs and house sit until our ferry from Livorno a week later.  We didn't know what to do. We were torn. It had been the best offer we'd had in a long time, but we still felt cheeky for even asking for a corner of the garden, and locking up someone else's house felt like a lot of responsibility. After some thought and discussion and a well prepared tick-list composed by Rita we took up this offer as we would have been stupid to turn down a warm house and bed. 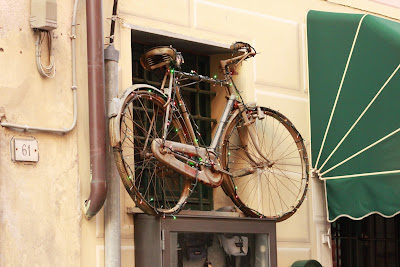 The days went by in a blur, whilst Rita and Richard were getting everything ready and shutting what of the house they could, Vick and I were making the most of the open fire and TV. Don't get me wrong, we did go into Brugnato, one of the local surrounding "villages" . I say "villages" but Brugnato is actually a city because it has a cathedral, and last year suffered from major floods. It is still recovering from these today.  We also went to the coast for a walk along the sea-front with Rita and Richard. We dressed in our usual shorts/flip-flop combo and they thought we were crackers.
On Friday night they took us out to their local Trattoria for pizza as an early Christmas present which was incredibly generous of them. For starters we had a flat fried chick-pea bread (which i can't remember the name of) but it was so delicious we could've just eaten plates and plates of that. But luckily we didn't as the pizza was just as delicious.

Rita's cooking was incredible. We ate like king and queen, from the tastiest frittata to an amazing ragu sauce made with actual beef instead of mince, everything she cooked was heavenly, and we honestly looked forward to every meal. I cooked pie on the second night that I think went down quite well, but nothing like Rita's cooking. She also had every imaginable pot, pan and utensil.  Vic thinks its the nicest kitchen she has ever seen. 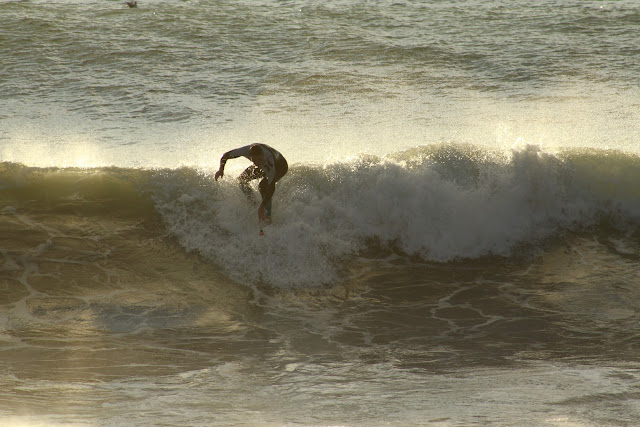 Rita and Rich left us on the Sunday where they took a mammoth drive to Boston in 2 days to spend Christmas with their family.
For the duration of the week we sat on our arses and watched TV.  I honed my skills at making the perfect fire and chopped kindling with an axe and felt manly.  Vic had a table to draw at which is a luxury after months of balancing a drawing board on her knee. It was really nice to have a week of sofa and television.  Crawling into the back of a van to escape the rain can drag you down at times. 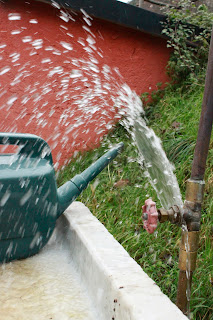 People who have read our past write ups will know I don't have much luck when it comes to plumbing. While we were at Rita & Richards we had another incident.  Their outside tap had frozen and had broken its seal.  Once defrosted it was spraying everywhere.

We couldn't really leave it for them to find, so in my expertise I started fiddling. I'm not to good at fixing so the problem soon became worse.  To cut a long story short I ended up having to cut the tap off and make a cork out of a piece of kindling wood with an axe.  It was cold and being wet wasn't helping.  It was a proper bodge but it worked and did the job. We also insulated it to prevent it from freezing and splitting the wood with Vick's favourite charity shop cardigan that we had shrunk in the wash the previous day.