After a week at Rita and Richards the day came to leave and travel down to Livorno where we were due to catch our ferry to Barcelona.  We had planned to leave for around 11 and spend the day at Pisa seeing as it was only down the road.  Cup of tea drank I went out to move the car round the front so we could pack up and be on our way.  It wouldn't start.  A couple of tries turning it over and the battery was completely flat. Nightmare.  I couldn't even move it to try and jump start it as the drive is quite a hill when pushing.  Luckily we were at a house that had a battery charger so out came the battery and on charge it went.  Battery charged and another tea drunk I went to give it another go.  Nothing.  And the battery drained again.  I can safely say that battery is dead.   Luckily the car has two batteries so I took out the other one and charged that.  It was now 3.30 so Pisa was off the agenda as we needed to arrive in Livorno for 9ish.  I didn't want to have the same issue in Pisa.  This battery was charged and worked.  After a quick change of spark plugs with a quick hairdryer pre heat the car was working.  Although 6 hours late we were on the road bound for Livorno.  It was only an hour down the road so not a massive journey, the next challenge was to find where the ferry left from, which wasn't as easy as it should have been.  It wasn't in Livorno at all, it was around 3km out and in the middle of nowhere. We pulled up into a very dark looking port with very little going on.  All we could see was a single ferry.  We drove into the official looking area ignoring the border guy on the roundabout.  We then turned back and went to the roundabout and asked the policeman whether this was the right place, he asked us where we were going then said ''yes this is the place, wait here I'll sort it out.'' 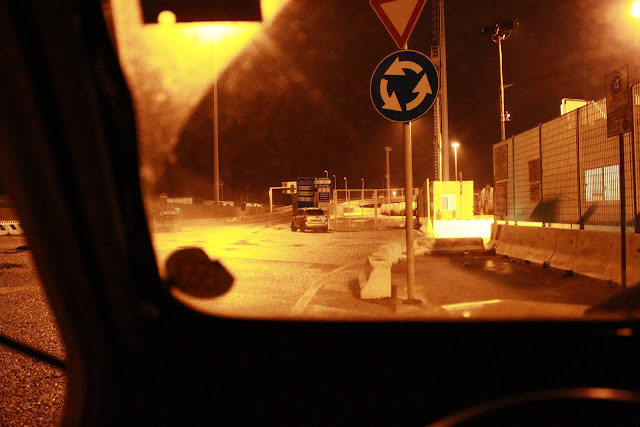 He then took our ticket printout and went and stood in the roundabout again.  We were sat on the roundabout for about 3 hours. In this time we received our boarding passes and room keys for the ferry and watched about 100+ cars get onto the ferry.  All these cars where loaded to the nines with tarpaulin covered roof racks and no suspension play whatsoever, some were also a mix of old and brand new cars with single drivers, but they all knew each other.  It was 11.20 and our ferry was due to depart at 11.30 and we were still parked on the roundabout.   It was at this point where we started to get a bit jittery.  I decided to go and ask our friendly roundabout man what was going on.  It turned out that our ferry was due for both Barcelona and Tanger.  The majority of passengers were heading for Tanger which I believe involved lots of papers going to and fro, and we were told we couldn't board until they all had. Eventually after another long wait we were allowed through, and drove straight on, no passport check or anything. The ferry eventually left at 2am.

After the last ferry being so bad we decided to get a room this time,  this was the best idea ever.  There were people everywhere! People were unrolling sleeping bags in the children's play area, behind the bar, basically behind anything they could fit a sleeping bag or pillow in.   So we found our room as soon as we got on the ferry.  A quick toilet and teeth-brush and then to bed was the plan.  Right on queue though was yet another plumbing nightmare... Our toilet wouldn't flush. 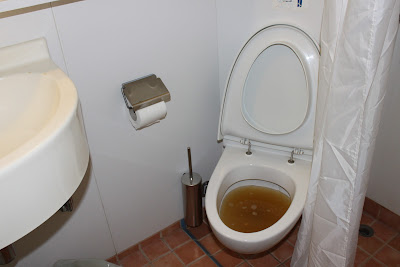 We were kindly left with a toilet full of piss. And not even our piss.   We didn't trust it not to overflow through the night so I ventured to the reception to let them know the problem, the gentleman nodded and wrote down our room number.  Nothing happened so he can't have told anyone.  I then went and found another member of staff and dragged them to show them the problem we had.  He then went and found a mechanic to fix the problem.  Nothing happened again and then two people came to try and fix the issue.  In the end we decided no one was going to tell us if it was going to be fixed so we went to bed at around 3.30.  We slept in the next morning to around 11 when a member of staff knocked on the door.  I answered thinking it may be something related to the toilet issue.  It wasn't, a member of staff muttered something in Italian then walked in and stuck some safety instructions in Arabic on the back of our door and walked out again.  I then went back to bed.  We didn't fully wake up until 1.  A 22 hour ferry is a long time, especially when its delayed by 3 hours. The rest of the trip I watched films while Vick did some drawing.  Because of the delay we weren't due to arrive in Barcelona until 10pm, which was fine as we had emailed the campsite from Rita and Richards to give them our details so that the security guard would know to expect us if we happened to arrive after they closed (at 10). However, on the ferry they kick you out of your room 2 hours before you arrive. 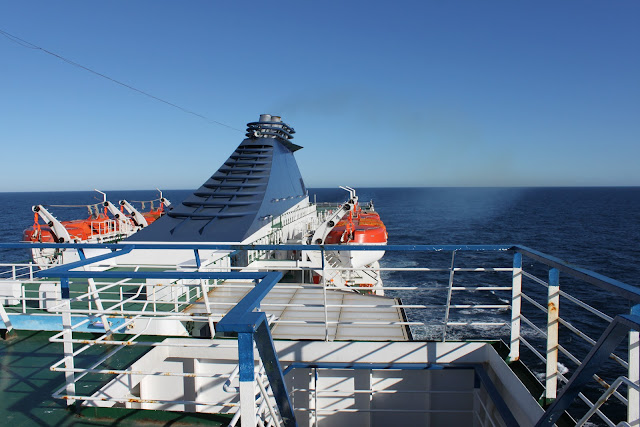 This isn't really an issue when there is usually somewhere to go and sit in the ferry.  But this ferry was rammed, so we sat in the corner of the self service restaurant.  We got kicked out of there to.  So we had to spend the last hour on the ferry in the reception area sitting on the floor.

We finally arrived at around 10.10pm and with only 9 cars and a lorry to get off the ferry it seemed to be every man for himself.  But we made it off and we were back on land where we seem to have more luck.

All in all another great ferry crossing.