Till next time Croatia...

Our last 4 nights in Croatia were spent in Split, mainly because our ferry to Italy was from Split so it made sense.

Our campsite was right next to the sea with the beach about 5 metres from some of the pitches, which I am sure in the summer people fight over to get.  We were offered the pitch with the fantastic views but in the end had to make the decision to pitch the tent in the corner as close to the wall as possible. It was so windy we had to hide.  Tent up we then hid away from the weather and into the warmth of the van.  If the wind wasn't enough it then decided to thunder and lightning and then rain.  When I say rain I mean RAIN.  It pissed it down.

I believe it doesn't rain much in Croatia as they don't seem to have allowed for drainage anywhere., and when I ventured outside to see if the tent was surviving it was sitting in a massive puddle.  I complained about the weather for the next 4 nights as it was pants and I hate packing away wet tents. 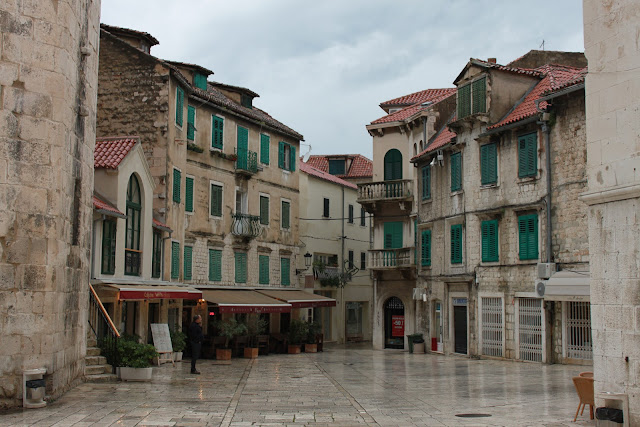 Our ferry left for Ancona at 9pm which gave us a day in Split. We had to leave the campsite by 12 and most shops were closed due to it being Sunday so we had seen the majority of Split by about 2.  We then had 4 hours to burn.  We ended up walking around the town 3 times and stopping off at a different cafe each time on the way round for a drink and to also dodge the rain. 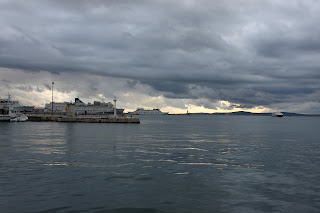 3 hours until departure we decided to head to the port to check in and get in line.  We thought this was best as we were bored of walking in circles.  I had imagined the port to be the same setup as Dover - drive up to a gate, wave your ticket and they give you a lane number.  It wasn't.  We could have chosen any ferry we wanted as the man on the gate let us through without asking where we were going.  In the end we parked up and decided to walk around and look up where we actually had to go.  Next to the port were the different ferry company offices.  We had to check in there the same as foot passengers and then go and get the car and park up.  Simple when you know how but very confusing when you don't.  After another drink in another bar and the best sandwich in the world ever, we were ready to board the ferry.  Vick even saved a bit of her sandwich to enjoy on the ferry, and was then gutted when we got on the ferry and realised she'd left it in the bar.
Boarding the ferry wasn't the same as Dover either, it was more like a game of tetris.  Luckily we were first in so drove straight in but everyone else including lorries had to reverse in, and it looked like a lot of work. 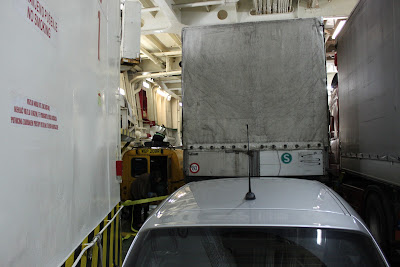 When we booked the crossing we were offered a room for an extra fee.  Due to saving the pennies we decided not to. This was the worst idea possible.  Due to the bad weather it was a terrible crossing and trying to sleep on a hard floor with the boat rocking to and fro with a gentleman trying to quietly blow up an airbed wasn't my idea of a nice crossing.  We thought it would be a relatively quiet ferry as well, being quite late and all, but as soon as we set sail the world and his (Italian) brother came into the room where Vick and I were and started getting out their food and wine and talking very loudly.  Next time we will get a room.

We will miss our eastern Europe part of the trip.  Even though we just scraped the side of it I feel we will return to explore a lot more. 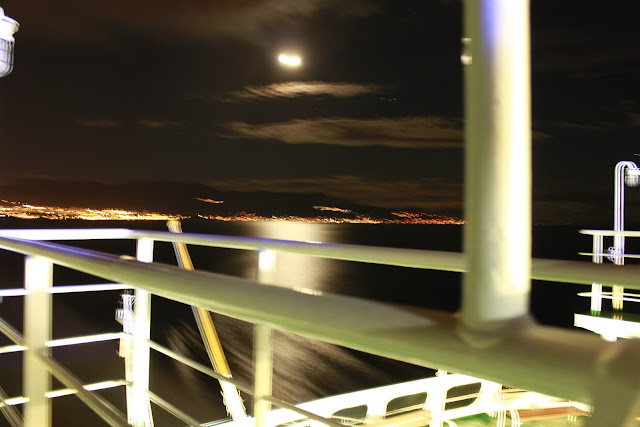