After 3 nights in Plantaze we headed south to Pakostane.  With only 2 hours drive we stopped for the day in Zadar.  We had arranged to meet up with one of Antes friends for a coffee and a chat so we text him to let him know we had arrived.  I had ran out of phone credit so we text him off Vick's phone instead, he let us know that he was having some dinner and that once he was in his way into town we should text him our whereabouts.  We realized after we had this reply that neither me or Vick now had credit.  We forgot that the price of texts goes up when in Croatia.  After a quick walk around the town we had to find a cafe so we could top up our phone online so we could text Tomislav our location. Meanwhile Ante was also texting us to see where we were meeting his friend, and trying to ring us, which also costs us. To cut a long story short we found a bar with wifi, swiftly topped up Vick's phone and replied to Tomislav and Ante.  We met up with Tomislav and had a couple of coffees and exchanged stories and then he went on his way whilst Vick and I went to go and see the sea organ, which if in the area is well worth a visit.  It might be worth a YouTube to understand what it is though.

With another hour until our next destination we headed back onto the road and aimed for Pakostane.  Nothing special about the place to what I know of but it was a campsite and it was open for another 5 days.  Another campsite with no one and toilets this time full of motorbikes and mopeds.  Instead we were told to use the toilets and showers in the apartments at the top of the campsite.  With the house pitched and car parked we had some dinner and off I plodded to the apartment to wash the pots and to have a shower.  Now I wasn't 100% sure we were allowed to use everything in the apartment so once I washed up I made sure I cleaned the kitchen space down clear of any bubbles and evidence I had used the place.  I'm a worrier, most people know that.  Washing up done I went to have a shower.  Due to the fact I was in an apartment I took advantage of this by getting unchanged in the main room rather than having to fight with everything in a tiny cubicle.  Clothes off and in the shower I was ready.  Shower time. 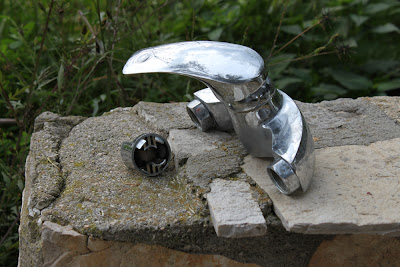 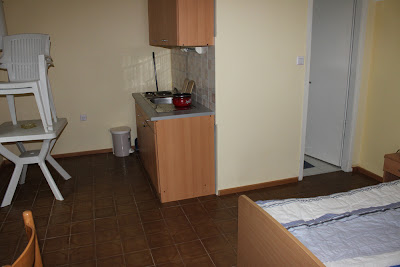 I lifted the tap which then carried on lifting to the point where it was coming out of the shower but also at the base of the tap.  Water was going everywhere and it wouldn't turn off.  What the hell was I going to do? I tried pressing it down again to which the pressure just pushed it back up it wouldn't turn, nothing would work, whilst standing in the shower trying to figure out what to do I noticed that the shower basin was starting to fill up quite a lot, enough to overflow into the bathroom.  I decided I needed help.  Never before have I got changed so fast and run back to the car.  When I shower I shower for a long time.  Vick knows this so normally gets out all of her drawing stuff, gets settled and cosy and... draws.   The apartments were about 150 metres away, 2 flights of stairs to the top.

We'll cut to Vick's version of events now, she is sat listening to some music quietly, drawing away happily when in the distance she can hear the pounding of feet. Feet running. And they are running fast. Knowing that I'm in the shower she gets a bit freaked out and turns off the music to listen. The pounding is getting closer and closer and louder and louder, and then the door flies open...

I don't know why I said that but I did.  I legged it back to the apartment to find that the whole place was flooded.  It was only the one main room with a small bathroom but I think the campsite owner was going to notice this.  Using towels, my tshirts and my hoodie as flood defence we started to figure out how to stop the overflow.  Shower head in the toilet was a start.  Because the campsite was about to close in 5 days the campsite owner went home during the night which was a problem as it was only us and the campsite dog and there was no way of contacting him.  Vick went off and tried to ring some numbers on the reception door hoping one was an out of hours emergency number to no avail.  I tried turning off all the water on all the taps in the place hoping at least one would be the shower.  Nope.  I even Skyped daddy to see if he would know where the water shut off point might be.  Where he said it could be it wasn't.
I then went to try the neighbours, another campsite that was closed.  I knocked but no one answered.  I then walked off and for some reason went back again and knocked even louder and finally someone answered and they spoke English.  Which was very lucky as I don't know what ''Do you have the campsite owners number for next door as I have flooded his apartment'' is in Croatian, or any other language for that matter.

5 minutes later the owner turned up.  He walked in to me in a pair of shorts and soaking wet and Vick dragging a towel around mopping up the water.  He gave the shower one look, smiled, popped downstairs to turn off the water (which I think was locked under the apartment) and returned back and fitted a new shower head and off he went.

I never had a shower that night. 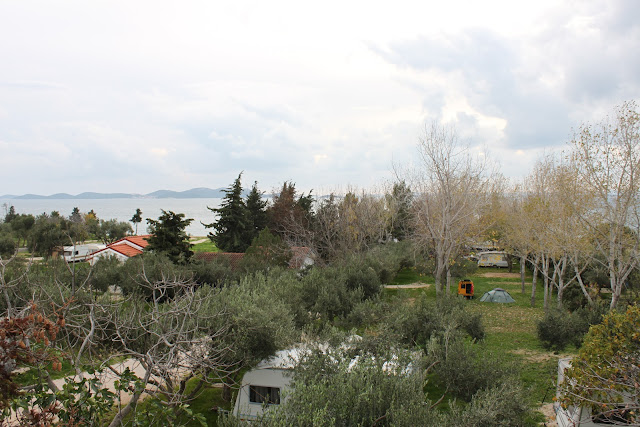 When we arrived the owner was very chilled out but even more so after I flooded the place, whether it was becasue he was about to start his holidays for December or he just couldn't be arsed.  Upon paying him for the 3 nights I expected to pay around €45 but he only charged us €15.  Result.
Email ThisBlogThis!Share to TwitterShare to FacebookShare to Pinterest
Newer Post Older Post Home