The original plan after Maribor was to head west, as more campsites were open, but as it turned out we ended up headed south. The reason for this being, a friend mentioned that a mutual friend lived near Samobor, so we contacted Louis (said mutual friend) to see if there was any room at the inn.
There was room at the inn luckily, we didn't even have to sleep in the tent. 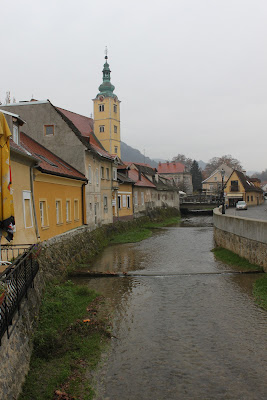 We got there with some very vague instructions. For those who know Louis will know that he's not very technology friendly, the quickest way for him to let us know where he was would've been a link on Google maps, or at least a postcode. But no, not Louis. Why make it easy. It was like an Easter egg hunt, a clue to the next clue. "if you come to Samobor we are 20 km west of Zagreb. I am really easy to find!! Park up in the centre Ask for Fontana 2cv PUB, run by my mates go there and they will tell you where the workshop is or direct you to my gaff"

So we park up in the centre, we ask for directions to the Fontana 2cv pub at the local bakery in the square, we head in the direction that the nice lady told us, we wander round looking in that area, we wander round some more, we leave that area as the pub blatantly isn't there. This wandering round goes on for a good 20 mins, and we are just about to ask for directions again (not from the same lady) when Vick spotted Louis walking towards us in the main square. I say she spots Louis, the first thing she spots is his bright orange Barbour 4x4 top.
So, having found our guide Louis walked us to the Fontana 2CV pub, which is nowhere near the main square, and would be difficult to give directions to an English speaker. 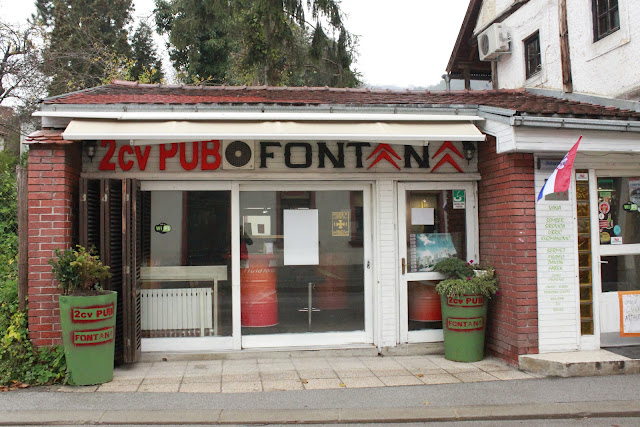 A quick coffee at the 2cv pub and then it was off to have a quick poke around and look at Louis' workshop.  Since leaving Holland at the van meeting we have probably seen around a total of 5 2cvs or related A-series.  In Samobor alone there are around 12 and they aren't even on the road.  Louis runs a 2cv workshop in the town where he builds chassis' for 4x4 and 2x4 2cvs. Quick mooch around his workshop and a look at the mahoossive ice cellar below we then went back to Louis' house just up the road outside of town. 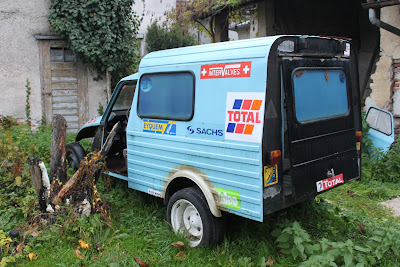 Louis took us into the outskirts of Zagreb to meet one of his colleagues.  We met Ante in the ''pit stop'' or as Louis calls it ''the Shit stop'' it was a roadside pub with flashy lights on the outside.  Where we were sat is where the pole is fitted on a Friday night so you know it was a classy place.  We were only there for about an hour-ish but I now feel we have added yet another 2cv face that we can now call a friend.  Ante we will see you in Spain 2013.

After the shit stop we then headed back to Samobor.  To make the night even better we then went to get takeaway PIZZA! (When I write about pizza on the blog it is as though we are obsessed with the stuff.  We're not.  Its funny how much you crave stupid stuff when its not as easy to cook or come by when at home.) Romi (Louis daughter) was kind enough to give up her room that night so that we could sleep in the sofa bed.  Thank you.   That night Vick and Louis got on the Croatian wine.  I have had to repeat a lot of the conversation that happened that night as Vick doesn't remember that much.  She struggled to get up the next morning.  Louis broke Vick.  She was OK at about 9pm the next day. 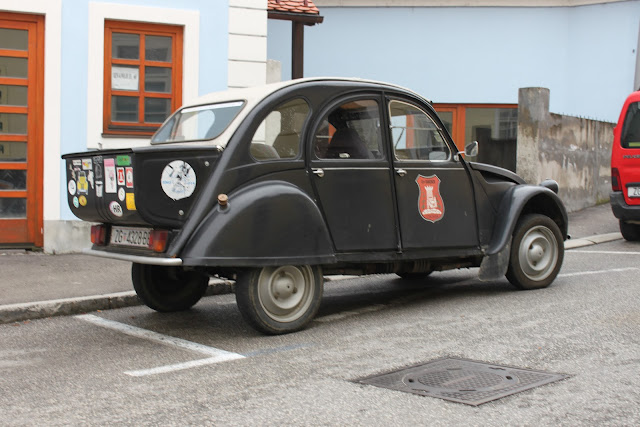 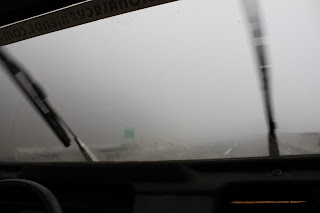 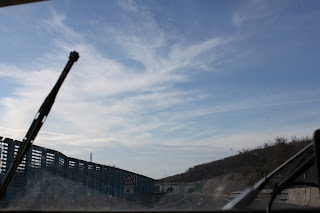 After a night in Samobor we then decided to head for Krk a little town on one the the islands in the north of Croatia.  It was about a 4 hour journey through the hills which means a 5 hour journey for a fully loaded van.  A last coffee in town with Louis and then we headed off to Krk.
Driving through the hills would have been very nice in the summer I am sure but in November its pretty pointless.  We couldn't see a thing.  Visibility was around 10 metres tops even when we joined the motorway you couldn't see lorries in the distance until the last minute.  It was a little scary.  Towards the end of the journey we headed through 3 tunnels, and as if by magic on the third tunnel all the fog and crap weather had disappeared.

Its funny how much you can perk up by seeing the smallest glint of sunshine. Even Vick's hangover eased up a bit. The wind was horrific but it was sunny!

The weather was warmer and nothing was freezing anymore. Happy days.