Maribor - The centre of European culture 2012. 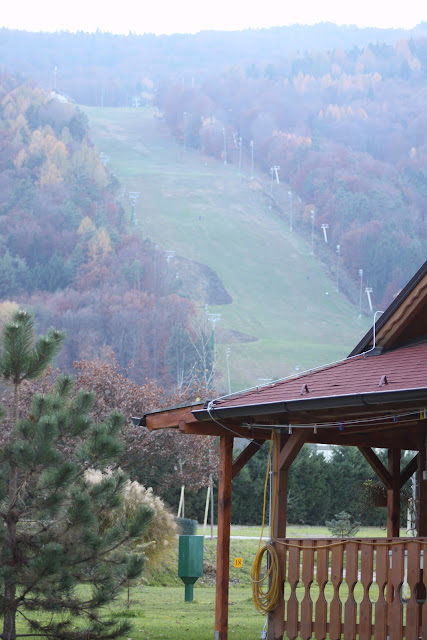 An hours drive up the road and we arrived in Maribor.  We weren't originally planning on visiting but as we decided after this to head to Croatia we thought we should spend a few more days in Slovenia.  I don't like rushing through a country so maybe adding three more days makes me feel a bit better?
We arrived to the campsite with reception closed (another frequent happening in off season camping.)  We set up the tent and car and waited to check in so we could unlock the electric hook up.  It was very cold as we were in the hills what we really needed was the heater on in the van but with no electric we just sat in the van in coats and huddled together for heat.  We decided this was silly so went off in search of warmth.
About 500 metres up the road from the campsite was a small ski village.  With no snow around it was a bit empty apart from the frequent surge of people from hotels in the area.  It was the world youth chess championships in Maribor.  There were people from all over the world there. I guess you would expect that at a world championship event.

After looking around and seeing the ski lifts and slopes we ventured into a little cafe for a drink.  Hot chocolate for me and a hot wine for Vick.  Its funny how a hot drink in a cafe can taste so good when its a treat.  Especially when you're freezing cold.
Eventually we made it back to the campsite to see if the campsite reception was open, it wasn't.  We went back to the van this time in the cold and dark.  I went back again a little later to see if they were open... they weren't but there was a key hanging on the door. The key for the electric had been there all along!  We just hadn't realised. 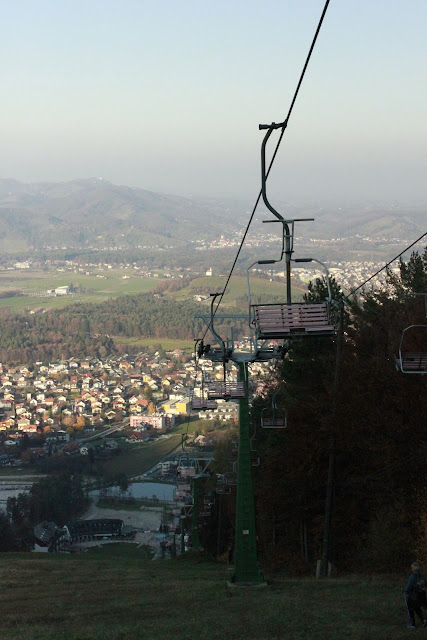 On Saturday we decided to not venture into Maribor and I thought it would be a good idea to climb one of the ski slopes.  Vick chose to sit in the warmth and draw.  It was a very nice day the sun was out and not a cloud in the sky.  There was however a brisk chill one where it burns the nose if you decided to climb a massive hill.  I thought I was going to die half way up this hill.  I was stopping for drinks and to take photos (catch breath) and people were running the hill... running!  I now know I am very unfit.  Downhill wasn't as easy either.  For some reason I chose to decent the professional slope.  Its very steep and if you start running there is no stopping.


That night the tent froze.  It was at that point we decided the cold should be no more... to warmer climates!!!