We rocked up at the Ptuj campsite which is right next door to a massive swimming baths and outdoor slide area (outdoor area closed off-peak), and found a place near the toilets. Unfortunately the toilets were locked. After setting up the tent and with full bladders we went in search of some open facilities. The off-peak toilets were attached to the (closed) reception building. A lot of the campsites we have been to have 2 toilet blocks, a main larger one for the peak season and then a smaller building which usually has a couple of showers and a couple of toilets in. But they are usually wet and warm so no complaints.  I guess it saves the amount of cleaning needed. 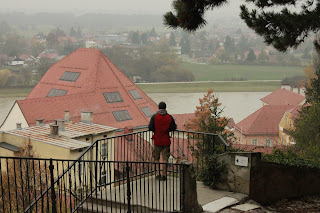 We had a look at reception for opening times, and found a notice on the door directing us to check in at the hotel over the road (the campsite/ pool and hotel were all managed by the same company.) Its been a while since we've been to a hotel so we weren't really sure if this was a posh one, nevertheless, we have never felt so under dressed in our lives. Neither of us had showered that day, Vick hadn't brushed her hair (not that she usually does), I was wearing 2 week old shorts, Vick in her squeaky flip flops and dirty brown old man cardigan.  I'm sure a few people milling about the lobby pulled their handbags a bit closer as we walked in.

We checked in and were told we had free access to the swimming pool and could each visit twice a day. Bonus. We enjoy swimming, and we enjoy swimming even more when its free.  So we walked back to the tent, happy campers.  Happy that is until it turned dark and we got into the tent later that evening.
We have slept under some lights in our time but this one was ridiculous.  It was like the light you see before you are abducted (not that I ever have been) It was daylight inside the tent.  It couldn't have been any brighter, which isn't  a major problem for Vick as she can sleep almost anywhere, under any condition.  I on the other hand, well, I'm very good at sleeping in, not so great at falling asleep.
I must have fallen asleep eventually as I woke up at the usual time of mid-morning. 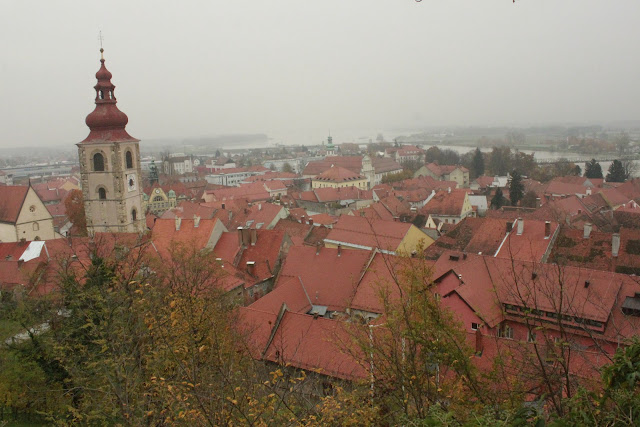 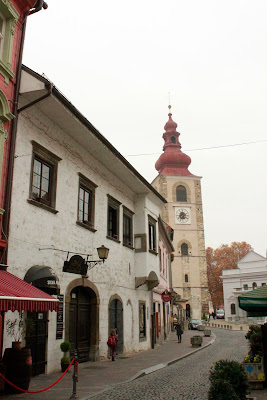 Our ACSI book described Ptuj as "one of the most beautiful, small, old Central European towns where culture and nature are entwined." Think they bigged it up a bit too much, or maybe we were expecting something different, but after walking around for a while we both agreed that we had visited much nicer places.  I guess that's why we like to discover places ourselves and not research anything prior to visiting, you find yourself being disappointed less that way.  Don't get me wrong it was a really lovely small town, and I imagine it has a completely different vibe in the summer, but it wasn't our favorite place.
We visited the swimming pool the day before we left. There were a couple of school groups using the swimming pool, but everyone else was in the jacuzzi, us included.  A quick blast down the slide isn't really the same when its just yourself and no one else but I still did it.  Free swim over we headed back to a brew and some food.

The next morning saw us heading back on the road so we packed up our kit and went back into the hotel to pay.  The nice lady took our swimming cards and asked "how many times did you use the pool?" A strange question to ask when free I thought but still replied "once." The pool wasn't free. It only cost €5 each but it still wasn't free.  If you ever get told the swimming is free in Ptuj its all lies.  Don't believe them.  Thank god we only went once.