After sadly leaving Budapest we started to head south aiming for (hoping for) warmer climates.  We only drove for around an hour and a half so a short day on the road.  If you ever want to come to Kék-Duna Camping (N 46°48'44"  E 18°55'36") and your in a camper van make sure you don't follow the sat nav.  It takes you down the smallest cobbled street.  If your in a large camper van then take a spare pair of pants.  However we were OK in the van so we just drove straight on down it.   The campsite is just a stones throw away from the Duna river so wasn't a bad view.  There's warm showers and toilets and its only 3000 HUF a night.  And its was our own private site as we were the only ones there.

Our next stop was Heviz. We didn't know what was in the town before we got there (we aren't the hottest at doing our research) - to us it was just another open campsite. Our general way of doing things is to pick a place/ campsite and then explore it once we are there. Others like to research a place and then go if they like the look of it. The way we do it works for us, we have come across a few hidden gems this way (and also some scary shit.) 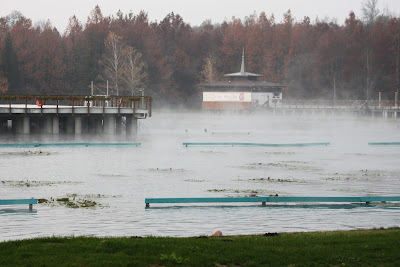 Turns out Heviz is home to one the biggest biologically active lakes in the world.  As far as Vick and I were concerned it was just a lake, we couldn't understand why everyone was swimming with a load of lily pads and fish.  Bit of info for you though - the water never drops below 24 degrees and it is said to have medicinal properties.
We didn't go in it though. We could've gone in for free as there was a canal that ran right behind the tent which was exactly the same water, but after hearing something rather large jump into it one night when we were in our tent it freaked us both out a bit. We dipped our hands in and that was enough. (There was nothing wrong with my hand unfortunately so I can't tell you if the medicinal water stuff is true. Sorry.)

We walked around Heviz to find a mass of shops selling swimming costumes and floats, I guess you get your target market and settle, we weren't looking for any of this so we headed off in search of the post office to post a postcard. Yes, just one. 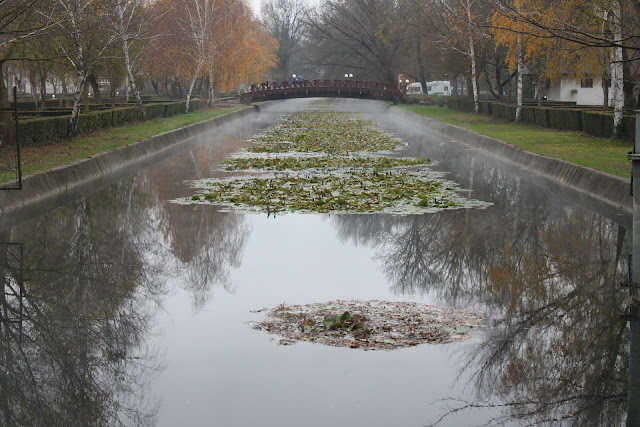 Because we liked Hungary so much we decided to try and stay another night on the border near Hungary and Croatia.  Arriving at the camp we were greeted by the owner who came out. i caught the words "wasser" and "nicht".  I just thought she meant no water for drinking etc.  I said ok and started to pitch the tent and settle in, then Vick came back from the toilets.  There was no water... anywhere.  Not a splash. And by the looks of it it had been that way for quite a while. So we decided to move on and head for Slovenia.  The satnav doesn't have a ''Are you sure you want to cross three countries?'' option so we ended up driving back out of Slovenia and into Croatia.   Our first time we had to show our passports since Harwich.  Me and the border guard into Croatia didn't bond very well when I didn't stop at the STOP sign.  He then decided to drag out his check for as long as possible just to be as awkward as possible. Croatia was nice for the fleeting 15 minutes we were in it. We then crossed back into Slovenia, stopping at all stop signs we came across. 15 minutes into Slovenia we were pulled over by the police, who just wanted to check our passports and documents for the car. In total that day we had to show our passports 6 times. It wouldn't have been so bad if we didn't have a Tinkerbell passport holder (mine, not Vicks. Don't ask.) Another thing that made it hard was everyone who stopped us asked us where we were going. If anyone can tell me how to pronounce Ptuj then please go ahead. We resorted to pointing to the satnav a few times. And even once the police officer/ border guard told us the pronunciation we would forget it almost immediately.
A long day considering we only planned on driving 30 miles down the road.