Day 22 on the road and we finally made it to Spain.  For once it wasn't raining.  But it had been, I knew this due to the fact that the Van sunk into the campsite pitch we chose.  I then proceeded to mess up the pitch as I tried to get out.

The first thing you notice when you arrive in Spain is that its very hilly.  You notice it even more when you car goes 30mph up them and lorries are laughing at you at they steam past you.  I soon laugh back at them when we reach the top.  It's all 70mph back on our side then. 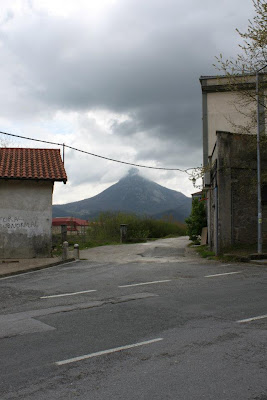 Our first stop in Spain was Etxarri Aranatz mainly because we had another crap scaled map so needed a large shop to get a better one.  It was quite a nice campsite.  Very loud.  But the Spanish love the night action.

The view wasn't to bad either.

We didn't manage to get a map in town. However we did manage to find Pamplona.  It's huge and has El Corte Ingles shops.  Basically it's Debenhams and has free toilets.  We bought a map and had a walk around.  We stayed their for four nights but for some reason we managed to completely miss out the old town in which they do the running of the bulls in July.  I was a bit gutted about this but I guess we will just have to go back.

Even though we had no timescale and all the time in the world I decided we should go from Pamplona to Barcelona.  All 494km in a day.  I regretted this decision after about 4 hours.  We still made it to Sitges just on the outskirts of Barcelona.  The campsite even had a bus stop right outside.  The campsite was nice, but because we were there for 5 nights and it's free we decided we should be near a electric hookup to charge up stuff.  It turns out only camper vans are allowed electric so we were camped in a very hard car park. No pegs went in the ground without being bent.  It was a nightmare and I felt like a novice.  The next purchase was hard ground pegs.
Day 3 at the site we decided to make a trip into Barcelona around €5 for a bus into the centre was a bargain for the distance.

We made a mission of the day and tried to see everything we left the campsite at around 10ish and returned back at 11.  I had been there before a few times so it was mainly to show Vick the wonders of the city.  Although we didn't go inside everything we did manage to see the main parts.  After seeing the Sagrada Familia, Olympic stadium, the Las Ramblas, Güell Park, Montjuïc, Plaça d'Espanya,  It was a long day. This was the first campsite we really spoke to people.  We have a lot of people come and talk to us about the car a lot of the time but its mainly about the car.  One night some people came over to talk about the car.  Paul and Darren then invited us to their Volkswagen camper for drinks.  This was a night out for us.  We hadn't had a new conversation in ages.  They were two of the kindest guys making me cups of tea becasue our stove had broken and feeding Vick with beer.  Because we enjoyed it so much we decided to stay another night and do the same thing.


Day 34 and we moved down the road to Alcossebre,  the ACSI book mentioned it had an off road track to reach the site.  It didn't lie.  We drove down the very bumpy track into the middle of nowhere.  Thinking we were going to nowhere we thought the campsite was either closed or no longer there.  We turned right and ended up in the most expensive looking campsite ever.. .It didn't seem right.   We were expecting a man in a shed with a calculator.  There were posh toilets loads of bungalows for hire and it was 100m away from the beach.  Bonus. 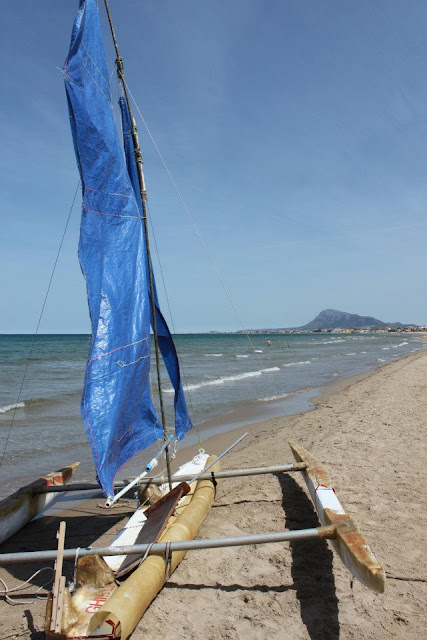 Becasue it was so in the middle of nowhere and we we're limited on the food we had with us we moved on down through Spain again.  This time to Olivia.  In contrast we turned up to the smallest dirtiest campsite.  It was also boiling.  The day we arrived it was 40 degrees.  There wasn't really much in Olivia apart from beach.  So the next day we went for a walk.... to the beach.  Where we saw this DIY boat.  It didn't look like it would work very well but the owner seemed happy with it.
Email ThisBlogThis!Share to TwitterShare to FacebookShare to Pinterest
Newer Post Older Post Home