The main purpose of having a mammoth journey from Croatia to Spain in 2 weeks was to arrive in Almeria on Christmas eve to surprise my mum.  After my sister told her this by accident the surprise wasn't so much of a surprise anymore.  In hindsight it was probably a good thing as I'm not sure how we would have kept it a secret for such a long time. 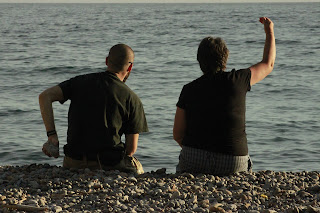 Since leaving Croatia we haven't really had a short days drive.  Every day has been a bit of a mission as there has always been a destination that we have had to get to.  With the final destination in sight we decided to carry on missioning it until we arrived in Almeria.  The next morning we left Barcelona and drove 6 hours south to Oliva, camped the night and then packed up and then drove another 5 hours to Almeria, which was quite pleasant in the Spanish sun.  Apart from another carburetor issue en route we made arrived safe and sound.  The long way round to get to Spain but we made it.  We had arrived a week earlier than planned but with the chance of sleeping in the camper van we couldn't refuse. For about a month now the roll mats have been leaking quite badly.  To be fair they have taken a beating having being used daily whilst on the road and we have had them for about 3 years.   With no bath to test for leaks we have waited until now to put them in the sea.  Its quite difficult to look for leaks whilst waves are crashing up against you.  We found the leaks and tried to fix them, but, we failed.  Two new Alpkit sleeping mats are on the to do list as we are going to be staying here for a while now and I can only sleep on the floor for so long. 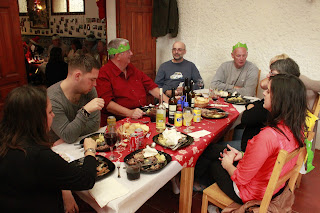 After a week of sleeping in a bed in the camper van we were then kicked out and put back into the tent as it was change over day, Kim and Paddy arrived on Christmas eve.  We haven't seen them since the wedding back in August so we were a little bit excited, however being the older brother I obviously hid this and acted as though I didn't really care.
On Christmas morning we all woke up at around 9 and gathered around to open our presents.  Always an exciting time for any household, even more exciting when you don't agree to buy presents for each other but there are presents awaiting... Kim and Paddy were thrilled with their free Grimaldi lines shampoo and shower gel and football that had washed up onto the beach.  It was then our turn to open presents from Kim and Paddy, they must have seen our wish list as tampons and a instant Bovril drink was just what we wanted. Mum and Dad received a free campsite keyring and a tin of mandarin oranges.  Exciting stuff! 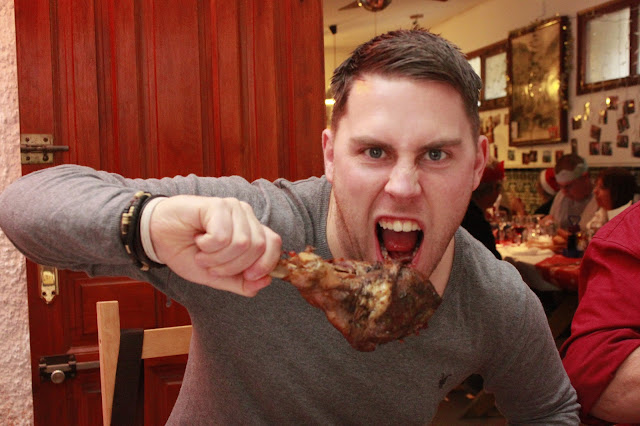 For the rest of the morning we rang everyone back home wishing them a Merry Christmas and then at around 1 o clock we headed up to the bar for our lunch, no roast tatties, stuffing or sprouts though at this meal, just the worlds biggest turkey leg!  We didn't think we were going to need to eat for the rest of the day, however after a load of drinks we departed back down to the house and me and paddy went to collect two of the biggest and tastiest pizzas ever. They were so big they wouldn't fit in the front of the van unless they were lifted when driving, and to get them through the camper van door they had to be turned sideways! 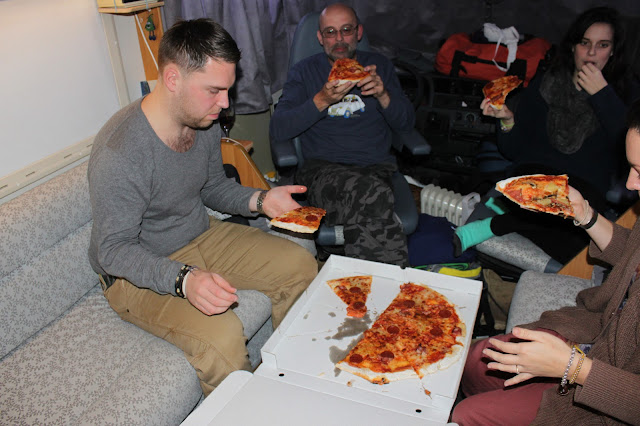