The week leading up to New Year we did nothing.  Well that's a lie actually.  We did do some stuff, just not much.  We decided to visit the Castle (Alcazba) in Almeria with Kim and Paddy. Vick and I had been before but thought we'd go again, as it was a day out, and we do love a good castle.  Its definitely worth the visit if you're in the area and is free to EU citizens. 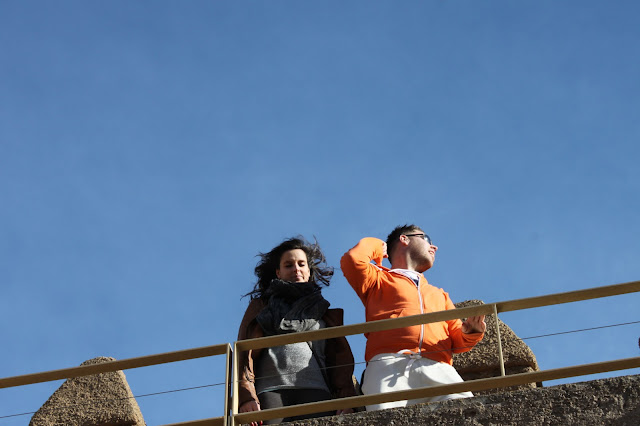 Kim and Paddy very kindly took us all out for a meal on the Friday night.  Due to being in Spain we decided to wait until as late as possible so there were actually other people in and not just us Brits.  We went for some real Spanish cuisine - an all you can eat Chinese at King Wok.
It was an odd experience.  I have been to plenty of Chinese buffets before but this one had the added bonus of people watching.  There was a mass party of what looked like Romanians (nothing like a good old bit of stereotyping) with music blazing out of there own Karaoke machine which was shit.  Everyone was keen on the  tepanyaki however they didn't seem to get the idea that you could just go back up... instead they would hand over 3 plates filled with a mountain of prawns and ask for them to be cooked.  One couple even told the chef off for not cooking them quick enough, and demamnded that he hand them over as they were.  They weren't very polite and I hope they got the shits. It was an amazing meal though, the choice of fresh fish and meat was unbelievable, along with a sushi bar, a pre-cooked selection and some puddings. You could even have squirty cream (which we all opted out of when we saw a young boy from the Romanian party squirt it directly into his mouth.) 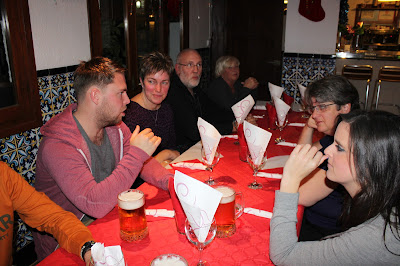 New years eve soon came around and Paul and Janice arrived mid afternoon ready for the evenings jollies.  Magda cooked everyone an amazing meal again which lasted through till around 11.30. We had Iberian cold cuts, then prawns and mussels, then chicken, and then ice cream or fruit salad. A lot of food, but a lot of good food. This time we made our own mix tapes as the music can sometimes be a bit random,  however, I think I made it worse. 8 minutes of Insomnia by Faithless whilst eating a meal isn't the best. However, Janice's rendition of meatloaf's Like a bat out of hell was the best.  The video is ready to go on YouTube so be nice to me Janice (I expect pancakes on our arrival at Chatenet.) 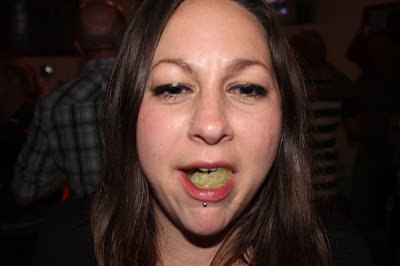 In Spain it is a new years tradition that at 12 on every chime of the clock a grape must be eaten.  "That sounds easy!" you say? You are wrong.  The first rule of grape eating is - always de-pip the grapes.  Its not nice biting into a grape with seeds in, and it makes it very difficult and unpleasant to chew and swallow, and you've got no chance trying to de-pip it once its in your gob, and especially not before the next chime.  Vick kind of gave up as you can see and was left with about 4 at the end.  The second rule is DO NOT look at anyone else as you will get the giggles and end up either spraying someone with grape juice, or being sprayed yourself (or worse, choking on your grape) All in all a very unusual tradition and I'm not sure how it started, but a very funny one. 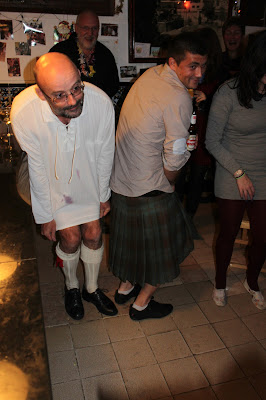 As the night progressed everyone got more and more drunk. Dad started the night in a kilt, and well, I'll let the photo explain the rest ...
The guy wearing Dads kilt is Florin, Magda's son, who was helping out. He was a bit reluctant to wear it at first, but once it was on I think he quite enjoyed it.

The numbers in the bar started to dwindle so we headed off to the beach where there was a fire going. Dad was going to attend this, but in his own words he "had someone else's legs" so he went off to bed, as did most other people. Vick went to bed about 2 and left me with Beatle (pronounced Be-atter) and John (pronounced John). For those of you that know me will know that I am usually the one eager to get into bed with a cup of tea and get some beauty sleep. But no, not this night.  After a quick piss on the beach I eventually crawled into the tent at 4.
Email ThisBlogThis!Share to TwitterShare to FacebookShare to Pinterest
Newer Post Older Post Home