Guten Tag!  We are now in Germany (we were in Germany when we wrote this, but the internet seems to cost the world. We're now in Poland.)

We had a really nice weekend at the van meeting in Leersum, Holland.  It was a great little meeting, a brilliant contrast to the sort of meeting we're used to, and great weather to go with it.  After the week of rain and wind we had in Amsterdam anything would have been better, but luckily we had wall to wall sunshine.  We had only just arrived and our first parcel was delivered by Martijn, the camp organiser.  I had to order some parts for the van and got them sent to his house.  I love the 2cv circle, even if they don't know you from Adam they're always willing and happy to help as much as they possibly can we had a nice German guy talk to us at the weekend and offered us a room in his house.  We had never met him until this weekend and we don't even know each others names. Unfortunately it was the wrong direction otherwise we would have taken up his offer. 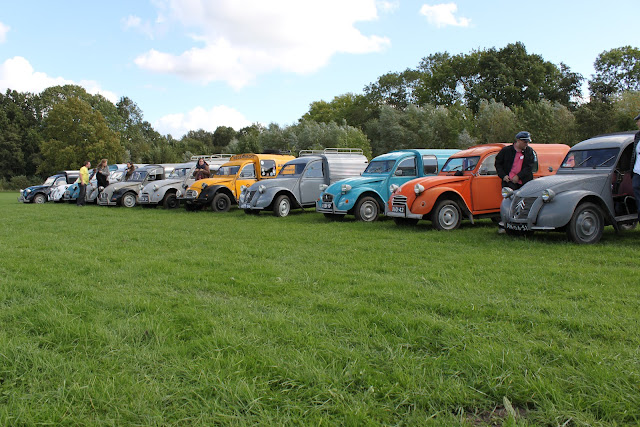 We popped off into town to get food for the weekend as we now plan our meals for the days ahead (it works out cheaper and we usually don't end up buying a load of stuff that we don't really need.)  Upon returning it appeared the Dutch camp had been over run by Brits.
I finally spoke to Tim Jessop.  We both know of each other from 2cv camps but have never actually had a conversation. we more than made up for this over the weekend! he had made the mammoth journey to the meeting from Lincolnshire just for the weekend and he was back on the ferry home on Sunday evening to arrive back at work the next morning.  Hardcore. 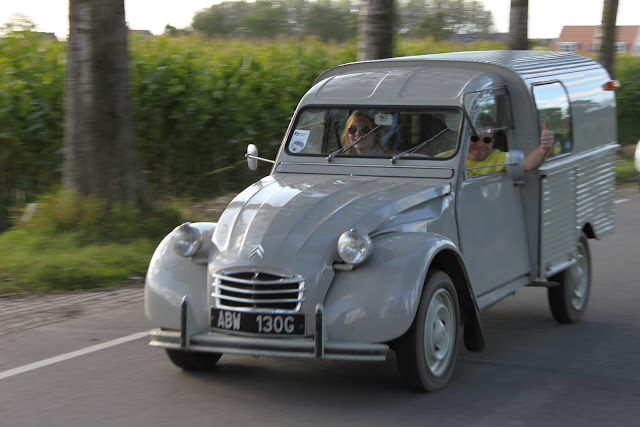 Sam Fieldhouse arrived on the Friday evening after catching the daytime ferry across.  The evenings were a little on the cold side, we spent the Friday night hiding from the cold in his tent and drinking.  I had tea.  If you were to ever need a drink of tea I would highly recommend speaking to Sam.  He has the whole collection of different flavours, which he presents to you in a lovely box. However, all I wanted was a normal tea.  He was also our second delivery boy who bought us our new Coleman generator for our single burner.  It wasn't playing ball so I decided to buy a new one and it's now like brand new.  Cheers Sam. 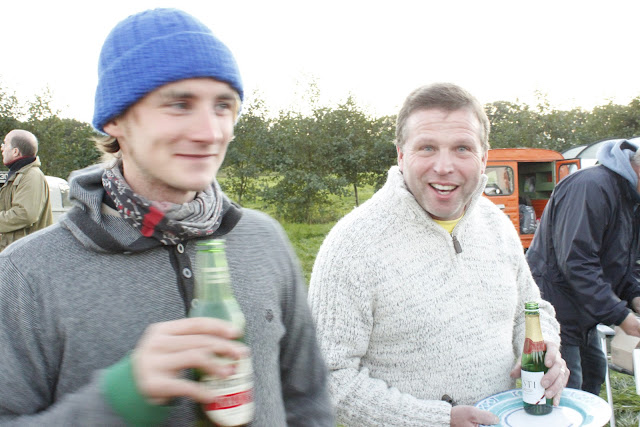 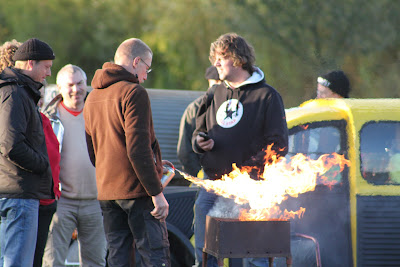 Saturday 29th September and we went on the convoy.  I always shy away from a convoy as  really it's just a slow moving traffic jam, but when you do join in they are always fun (and you tell yourself that from now on you'll stop being so miserable and join in a bit more) The convoy arrived at it's destination, what looked like a nice field overlooking the motorway.  It was in fact an old war bunker used by the Germans.

We really should have had a proper walk around but we just went and treated ourselves to a coffee.  While we were sat in the sun we were joined by another Brit John John who started talking to us about where we were from who we are etc. we then told him our current situation and plans.  He loved it and gave us some good destination ideas along the way.  He then very kindly treated me to a bit of chocolate cake.  A major treat for me.  It even had decorative chocolate on top of the chocolate!!  Thanks John John 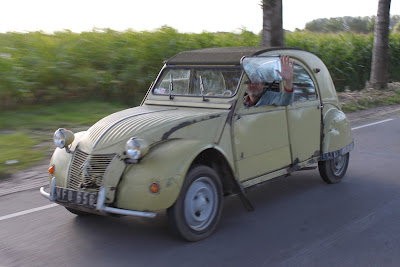 The evening of the Van meeting involved a big fire and a questionable band.  It was a good evening though but very cold, Sam ended up wearing about 4 layers while I was still in shorts.   I don't know what it is about fires but you (and everyone else around you) end up staring into it, mesmerised.

The Sunday was a pack up and leave day.  We eventually bothered to leave at 1 after saying our goodbyes and headed to the Holland/ German border.

Vick and I have made a pact that we will make more of an effort to speak to people that we wouldn't usually speak to. It's not that we don't like other people, its just that at most 2cv camps we go to we just talk to the people we know (I don't know if its laziness, or not wanting to be out of our comfort zone, but either way I'm sure we aren't the only culprits.) 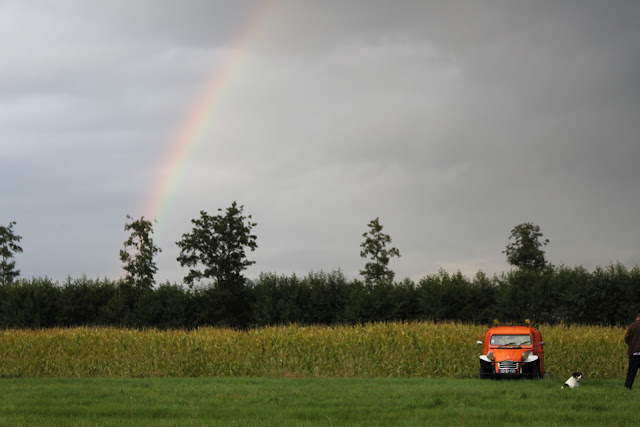 It's now back to the two of us and very quiet, although everything seems quiet after a week under the flight path of Amsterdam.  We have never slept better these past few nights.  One more week to go and then we meet up with more people.
Email ThisBlogThis!Share to TwitterShare to FacebookShare to Pinterest
Newer Post Older Post Home