Throughout our eastern part of our journey I was a little worried about breaking down.  I can fix a lot of basic things but if anything serious was to happen it would have been a bit of a disaster.  You cannot describe how happy I was when I drained the battery by leaving the lights on one day and then unwound the gearbox a few days later leaving us with reverse gear only. 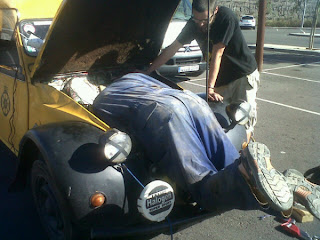 The reason I was so happy is the fact that both Dad and Paul were only a bus journey away and we weren't in the middle of Hungary.  The battery wasn't so much of an issue as we were at the campsite at the time, but the gearbox unwound in the Decathlon car park, and I didn't fancy driving all the way back in reverse.
After a quick text saying what we had done Dad and Paul both jumped on the bus.  After a quick stop off for some lunch, the recovery team arrived.  An hour later we were all in the car heading back to the campsite.  The perfect breakdown if there is such a thing.

Paul's main challenge whilst away was to fish.  Being so close the the sea it made sense.  Once him and Janice had fully set up the camper he was in serious fishing mode.  For Christmas he got all the gear... but had no idea.  He went out a couple of times and tried various types of bait but still caught nothing.  Dad then dug his rod out... the race was on.  Who could catch something first.

I think I won as within 20 minutes I caught boredom.  Even so I battled on and even went out in the canoe one day which was a bad idea as the waves picked up and by the time I had cast out I was in the rocks.   I decided that fishing is not my sport and the only way I was going to catch anything was with a grenade.
I like to think Paul is still stood there now catching nothing whilst the 2 italians that were at the same campsite are still dragging out metre length sized squid every night right in front of him. 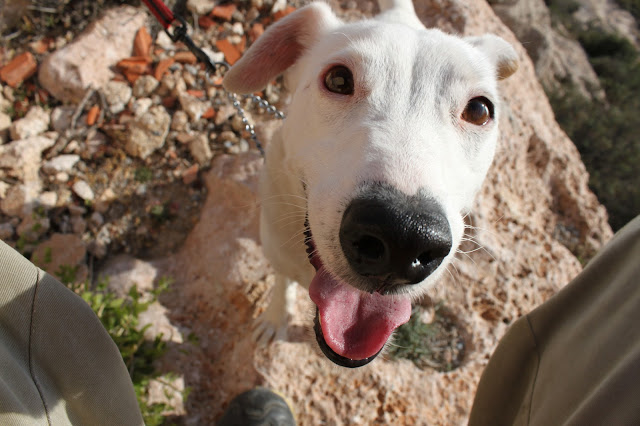 With only a week until we were due to leave I decided to go exploring and went for a danger walk with Zac (Paul & Janice's dog) We took a walk up the rambla and into the desert.  For some reason when I go for a walk alone I always choose to go the stupidest ways where no one knows I am going. 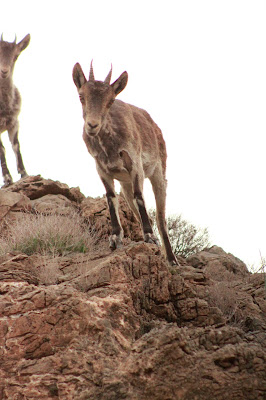 So once into the rambla I decided it would be a cracking (stupid) idea to walk up a massive hill and down the other side, the main reason being to find some goats to photograph and to find a skull.  I found some, but goats don't like dogs and they have a distinct advantage over me when it comes to a face off on a cliff.  Once I found out that they weren't going to stand down I eventually ran back up the hill and down again.  I decided 'Killed by a goat' wouldn't have looked very good on my headstone when buried.  I also didn't find a skull.

One of the main purpose's of the walk was to go and take some pictures of the 'arrival' who turned up one night during the week.  The Thialf arrived late one night and got the whole campsite talking.  You couldn't miss the thing.  It was mahoosive! This thing was the worlds largest Semi-submersible crane vessel and weighed 136,709 tons and had a combined maximum lifting capacity of 14,200 metric tons with its two cranes.  Everyone was saying it was there for different reasons. Some were saying it was fixing a pipe under the water between Almeria and Morocco, from what we could work out we reckon it is on its way to the crash site of the Costa Concordia in Italy where it is going to winch it out and repair the damage.  It left Rotterdam just before Christmas and arrived in Almeria on the 15th January.  Turns out we were wrong also as its now in Algecerias which is nowhere near Italy.  If you really feel the need to you can track it here. 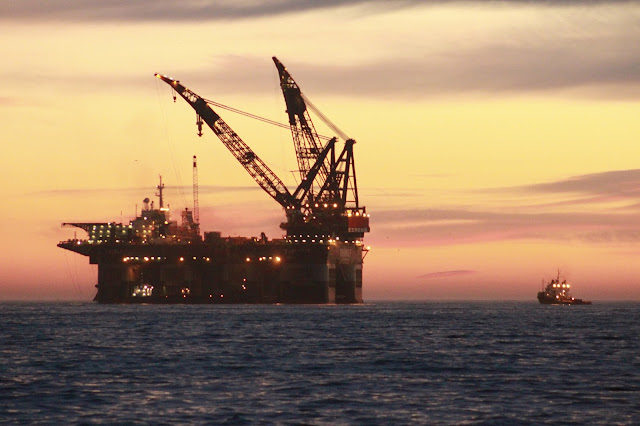 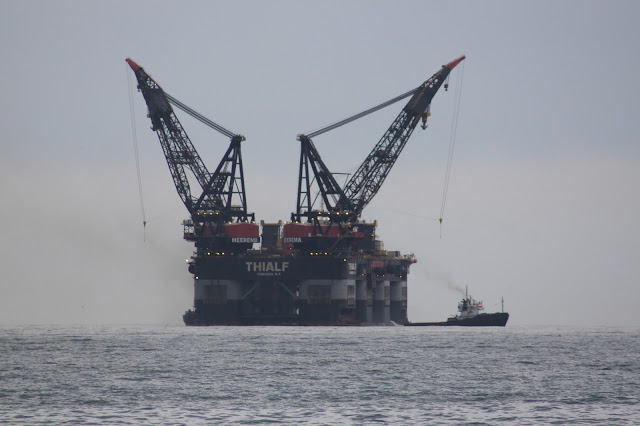 For the rest of the week 'Dolphin Watch' was out the window, a new craze was in town... 'Crane Watch'. A small tug was going to and from the ship, causing much excitement.  When another ship turned up and cranes started moving the cargo off it the excitement went through the roof!

It was at this point we decided we needed to leave.